This blog is dedicated to helping you

How to Turn a Client Setback Into a Significant Success 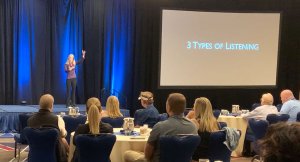 Earlier this summer, I delivered a keynote

to a few hundred people.

It went well. I got a standing ovation.

I received a lot of nice comments

from audience members who

stopped me after in the halls.

But a few days later,

my agent reached out to say

the client “thought it was great,

My ego immediately kicked in.

I thought to myself,

They stood up. They stopped me in the halls.”

I knew it could be better.

I texted a colleague of mine

and at his encouragement

I reached back out to my agent

This was an opportunity to show

that I’m a pro and that I always want to improve.

Fortunately, I had another keynote in August

with this same organization.

I had a second chance.

Here’s what I did…

In short, I revisited EVERYTHING.

It took a ton of hours,

and there were definitely moments when my ego kicked back in:

“I’m in the Speaker Hall of Fame.

I’ve spoken to hundreds of companies.

I can’t believe I’m putting in this much time!!”

But rather than rest on my past success,

I was committed to crushing it in the future.

And here’s what happened.

The keynote did not get a standing ovation.

It got something far more valuable.

Because the CEO had realized that

what he wanted after Round 1

was not a “whiz-bang-WOW” presentation.

What the CEO wanted instead

micro details about their business

that he realized after our call I could contribute.

Did it take a lot of work?

But here was the response from various audience members:

“We’ve been in the business over 30-years. You’re the best speaker we’ve ever had.”

“I wish we had this recorded so we could share it with our younger team members.”

“Everything you were talking about was exactly what we’re dealing with. Everything was so on point.”

The President & CEO himself gave me a big hug after

He followed up with an email last week:

“Victoria,
Just wanted to again thank you for your presentation in Idaho; it was spectacular!! I received feedback from multiple extremely enthusiastic advisors, who really appreciated your message. None of this would have been possible if you had not taken the time to proactively solicit feedback and then act on it. Above and beyond !! Can’t thank you enough!!”

So the next time you receive a blow, remember…

although it stings at first

“suck it up buttercup”

step up to the plate

and show them what you’re really made of.

Risk Forward and Rock On,

PrevPreviousPreparing for Next Year
NextA Leadership Essential: Clarifying What Your Words MeanNext
Menu